Drug Addiction Is Not A Disease, Sorry Not Sorry! 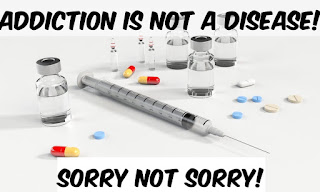 This has become such a conflict between people these days and it literally drives me insane to hear people describe addiction as a disease. Take a moment of your time and think about diseases that have affected loved ones around you, cancer, heart disease, measles, chickenpox, STD's and so many others that the list could go on forever. Diseases come from all kinds of different sources like bacteria, infections, viruses, genetics and more and are unexpected and uninvited. Nobody intentionally chooses to get cancer, have a heart attack, or contract an STD. Drug users choose to smoke their drugs, shoot their drugs, or eat their drugs, they are not just randomly appearing in their bodies to attack and kill them, IT IS A CHOICE.

Recently drug addiction has been labelled a disease and there are some serious issues with that. Due to the changes that the brain makes due to using drugs, repeated use and abuse affects their self-control. The brain creates intense impulses to take drugs repeatedly which has somehow now become a disease? Drug users love the feeling they get when they use drugs much like people enjoy the feeling of eating or sex but neither one of these is labelled a disease. Being addicted to something is a personal choice and requires self-control and moderation which leads me to believe whoever is backing up the "addiction is a disease" theory is full of crap.

We have all lost loved ones due to addiction and yes it does suck, but every one of those people chose to do drugs. When you find out your mother is dying from cancer it is heartbreaking and you know very well she did not choose to get cancer. Cancer is a disease that hurts millions of people around the world and continues to do so if they could choose not to have cancer they would. Sadly a heroin addict knows they are dying every time they inject themselves but they love that feeling so much they will do it anyways. Many addicts hate their lives and are trying to escape the only way they know how, drugs can make everything seem better even when you are homeless, broke, alone, and hurt. They are choosing to do drugs to make the bad things go away, they are not forced into it or suddenly fall ill.

Smoking falls into this category as well apparently because nicotine is a drug and those who smoke are addicted. So every time you see a person smoking is your first thought that they have a disease? No they are addicted to smoking and choose to do so, yes it is hard to stop, yes it requires help sometimes but no it is not a disease.

If we begin to classify addiction as a disease we should start telling everyone that is overweight due to eating they are diseased, cigarette smokers are diseased, sex addicts are diseased, and they should all fall into the same category as those undergoing chemotherapy and radiation. Cancer patients pay thousands of dollars for their treatments whereas drug addicts can rape the welfare system, get their methadone paid for, have expensive dental work paid in full by the government and many more shady things that make absolutely no sense. Justin Trudeau and other politicians need to take a look at the system and rethink what is classified as a disease and gets funding and treatment paid for by our government.

Take for example the fantastic show Breaking Bad. Walter would not have gotten involved in the drug manufacturing business if his cancer treatments were paid for. Addicts funded his crime with their addiction to drugs and complete lack of self-control and turned him into a greedy monster. Stick that in your pipe and smoke it government.

Recently in our town, they have opened a housing building for addicts where people are leaving needles in their mailboxes, in their fences, threatening to kill those who live around them and their families in their sleep and burn their house down because they are asking them to stay off of their property and out of their yards. Supporting criminal addicts in the way we do makes absolutely no sense to me. Crime rates are rising, people are getting frustrated and scared but we are going about dealing with it the wrong way.  What do you think about the label of addiction? Are they right about it being a disease or do we choose what we put in our bodies?

I have fought addiction when I was younger and I beat it multiple times. I have had many ups and downs with drugs since I was 11 years old and I made the decision to quit all on my own. I have never been to rehab, I have never taken medication to help me quit, and yes it was hard and I went through hell to do it. I made the choice to prioritize and take back my life. Here are a few tips I used to help kick your addiction: