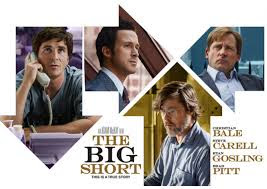 Based on the Best-Selling Book from the Author of The Blind Side and Moneyball, Critically Acclaimed Hit Debuts on Blu-ray™ Combo Pack March 15, 2016

HOLLYWOOD, Calif.  – “One of the most absorbing and entertaining films of the year” (Mara Reinstein, Us Weekly), director Adam McKay’s “witty, smart, sharp and funny” (Scott Mantz, “Access Hollywood”) masterpiece THE BIG SHORT arrives on Blu-ray Combo Pack, DVD and On Demand March 15, 2016 from Paramount Home Media Distribution.
Nominated for five Academy Awards including Best Picture, Best Director, Best Supporting Actor (Christian Bale), Best Adapted Screenplay and Best Editing, THE BIG SHORT also was named one of the top 10 films of the year by The Wall Street Journal, New York Times, Los Angeles Times, Entertainment Weekly,Us Weekly, the American Film Institute and many more.
Based on the best-selling book by Michael Lewis, THE BIG SHORT details the true story of four outsiders who risked everything to take on the big banks during the greatest financial fraud in U.S. history.  Christian Bale, Steve Carell, Ryan Gosling and Brad Pitt deliver career-best performances in “the most wildly entertaining must-see movie of the year” (Toni Gonzales, Fox-TV).
THE BIG SHORT Blu-ray Combo Pack with Digital HD is packed with over an hour of bonus content. Go behind the scenes with Ryan Gosling, Steve Carell and Christian Bale as they talk about their characters and the real people in this unbelievable true story, then discover the facts behind the gripping events as author Michael Lewis and the filmmakers discuss how the most incredible heist of the century was pulled off.  Plus, catch five deleted scenes that were not shown in theaters and hear director Adam McKay reveal the challenges he faced in bringing the book to the screen.

The Blu-ray Combo Pack available for purchase includes a Digital HD Version of the film that can be accessed through UltraViolet™, a way to collect, access and enjoy movies.  With UltraViolet, consumers can add movies to their digital collection in the cloud, and then stream or download them—reliably and securely—to a variety of devices.