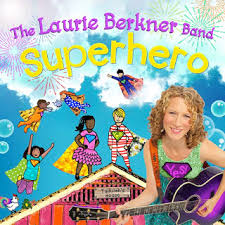 "The Adele of the preschool crowd."
-- The New York Times
"In the world of children's music, Laurie Berkner isn't just popular, she's an icon. Her earworm tunes have taken her from The Today Show to the White House."
-- The Denver Post
NEW YORK -- Eight years coming, and it's almost here!  The Laurie Berkner Band, authentic superstars of kids' music, proudly announces the September 23rd release of Superhero, the highly anticipated first full album since 2008 loaded with all-new songs by beloved children's musician Laurie Berkner.Jam-packed with 21 freshly composed Laurie Berkner originals plus two "bonus" tracks, Superhero is indeed the album Laurie's fans have been waiting for. With music ranging from quiet, a capella finger plays to get-up-and-dance full band anthems, this is Laurie Berkner at her absolute best.Says Laurie Berkner, "I wrote Superhero thinking about many things that I found fun as a kid, and I'm so thrilled to have such wonderful guests to share that fun, including superstar crown prince of reggae, Ziggy Marley, super musical yogini Kira Willey, and our own superbassman,Brady Rymer, who gets a special slot up front in addition to his regular vocal and instrumental contributions as a member of The Laurie Berkner Band.Superhero soars through a spectrum of musical styles, including '60s pop, rootsy rock, lullabies, reggae, Latin, and more.  As fans have come to expect, all of Laurie Berkner's songs on Superhero speak to kids without talking down to them, through imaginative lyrics that both enchant and empower.Laurie explains, "To me, Superhero is about self-empowerment -- being our best selves and discovering the superhero in all of us."Brimming with contemporary edge and energy, Superhero leaps into action with a single bound, taking flight with the title track's splendid horn line and Laurie Berkner's exuberant vocals.  "Superhero" has all the earmarks of a Laurie Berkner blockbuster:  a powerhouse vocal showpiece that offers plenty of contrast, uncluttered instrumental and vocal textures, tremendous dance energy, and an empowering, joyful message for kids and grownups alike.Selected highlights -- in an album abounding with great moments -- include the Caribbean flavored "My My Marisol," featuring 5-time Grammy® winner Ziggy Marley. Laurie's daughter, Lucy Mueller, charms listeners by singing with her mom on "Elephant In There," a story-song that offers a cure for imaginary internal elephants.  Superherocomes to an emphatically empowering close with the ultimate superhero message in the shape of an eternally positive "Yes!"A former preschool teacher by day and indie rocker by night, Laurie Berkner started marketing her music more than fifteen years ago from her living room on her own label, Two Tomatoes Records.  She is now widely recognized as a pioneer in the "kindie" music genre and was crowned "the undisputed queen of kindie rock" by USA Today.  The Wall Street Journal noted, "Her music is distinctive because it speaks to kids without talking down to them, charming youngsters without boring grown-ups."Superhero will be available wherever favorite albums are sold, at www.laurieberkner.com, and at all digital retailers, including iTunes, Amazon, Google Play, Spotify, and more. 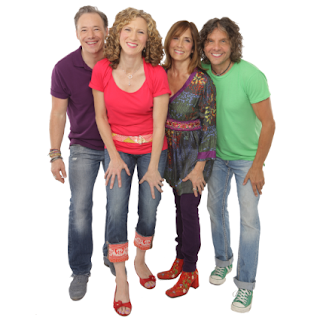