Kelowna ranks No. 16 among the U-Haul Top 50 Canadian Destination Cities

U-Haul International, Inc., the industry leader in do-it-yourself moving and self-storage, is pleased to announce the top U-Haul Destination Cities for 2016 with the return of its annual migration reports.


Kelowna ranks No. 16 among the U-Haul Top 50 Canadian Destination Cities. Kelowna saw a 9.5 percent increase in year-over-year arrivals, rising 8 spots from last year and continuing to be one of the busiest Canadian markets for incoming U-Haul trucks.


U-Haul Destination Cities are ranked according to the total number of arriving one-way U-Haul truck rentals to a city in the past calendar year. Destination Cities do not account for departing traffic and thus do not necessarily reflect growth like U-Haul Growth Cities. Destination Cities reflect the volume and regularity of do-it-yourself movers coming into a community. 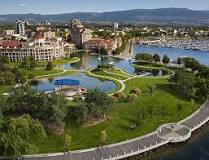 Kelowna is a city in the south of Canada’s British Columbia province. It’s in the Okanagan Valley, on the eastern shore of Okanagan Lake, surrounded by provincial parks, pine forest, vineyards, orchards and mountains. Its downtown area incorporates waterfront City Park and a lakeside cultural district. More than 20 local vineyards offer wine tours and tastings.