According to NPD research, games and puzzles are up 18 percent, the largest category in toys last year. Family games are showing no sign of slowing down. In the wake of mega-hit action games like Wet Head and Pie Face, the popularity of games is definitely on the rise.

Break Free and Safe Breaker, part of the new Spy Code game line from YULU Toys, are joining the trend this June. With a great mix of action, strategy, skill and luck, they're perfect for any family game night gathering! 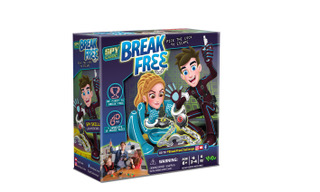 First, players handcuff themselves together and insert a maze into each handcuff. The game includes three maze colors. Each color represents a different level of difficulty, making each round unpredictable. Using the lock pick, players must try to pick the lock on their handcuff as quickly as possible. The fastest to break free from their handcuff receives a token that corresponds with the maze color. There are points on the back of each token, the player with the most points after playing all three rounds, wins the game.


Players in Break Free must race to pick the lock on their handcuff to be the first to break free. Take the #BreakFreeChallenge and record and share your race to escape with the online community. Family and friends are also encouraged to come up with different challenges each round, like playing blindfolded or race to escape after a series of relay races, making the game an endless amount of unpredictable and creative fun! 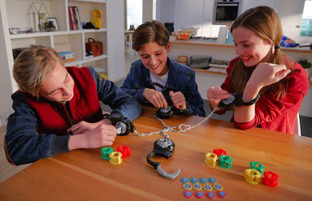 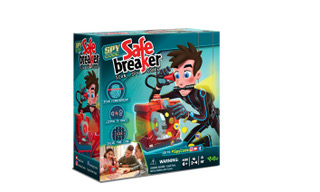 In Safe Breaker, players must crack the code and successfully break into the safe without getting caught! Each round challenges memory and requires a mix of strategy and luck to win the game.

To start the mission, players pick a card and turn the safe combination to the corresponding number shown. Next, use the fingerprint scanner to test the number. If the light is green, the safe will release some coins. If the light is red, connect the spy listening gear to the safe to hear a top- secret clue to deduce the correct combination code. Clues include mathematical chances and luck elements, allowing for a new experience each round.

BEWARE! Players who release police coins will alert the police and must return all their coins to the safe. The spy who collects the five golden coins or two diamond coins first, wins the game. 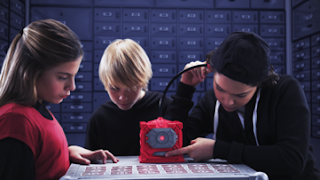 Safe Breaker will be available in the USA at Target.

Safe Breaker will be available in Canada at Walmart and Toys R Us.

These games were so much fun we had an awesome time figuring out the mazes in Break Free! These are some of the best challenge games I have ever played and perfect to keep kids building their brains this summer when school is out! Fantastic gift for any age, even us grown ups had a great time challenging the kids.