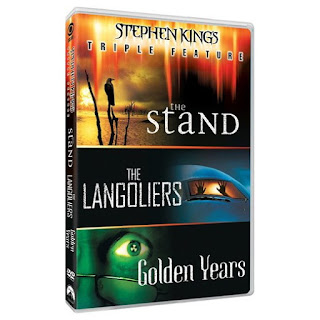 Stephen King is by far my favorite author I have been reading his books since I was 11 years old and loved each and every one of them. His movies are just as awesome. Suspense, thrills, mystery, excitement, everything you want rolled into every film he makes. My favorites would have to be IT, Pet Semetery 1 & 2, The Mist, and Thinner. In this triple feature you get:

The Stand:
After a deadly plague kills most of the world's population, the remaining survivors split into two groups - one led by a benevolent elder and the other by a maleficent being - to face each other in a final battle between good and evil.

The Langoliers:
Most of the passengers on an airplane disappear, and the remainder land the plane in a mysteriously barren airport.

Golden Years:
Explosion in the most secret laboratory of the USA. The old janitor Harlan Williams is incubated by totally unknown chemicals. Now he changes and becomes younger instead of older. The government is interested in finding out everything about this changes and hunts the fugitive Harlan. A hunt across the USA starts.