Overview:
Author E.B. White’s beloved tale of “some pig” was brought to life in 2006’s marvelous film adaptation starring Dakota Fanning and featuring an all-star cast of voice talent including Julia Roberts, Oprah Winfrey, Kathy Bates, Robert Redford, John Cleese and Steve Buscemi. Now, the entire family can relive the magic of this timeless tale with a limited edition gift set featuring both the film and a copy of the original book.

Arriving October 10, 2017, the Charlotte’s Web Gift Set with Book includes a DVD bursting with more than an hour of bonus features such as a behind-the scenes exploration of how the film was made, commentary by director Gary Winick, a look at the cast, deleted scenes, music videos, a gag reel, and more. 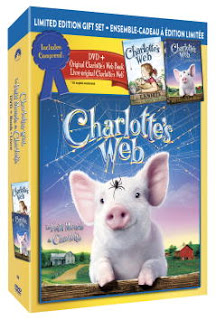 The classic story of loyalty, trust, and sacrifice comes to life in this live-action adaptation.  Fern (Dakota Fanning) is one of only two living beings who sees that Wilbur is a special animal as she raises him, the runt of the litter, into a terrific and radiant pig.  As Wilbur moves into a new barn, he begins a second profound friendship with the most unlikely of creatures – a spider named Charlotte – and their bond inspires the animals around them to come together as a family.  When word gets out that Wilbur's days are numbered, it seems that only a miracle will save his life. A determined Charlotte spins words into her web in an effort to convince the farmer that Wilbur is "some pig" and worth saving.
# # #