Veronica and the Volcano
by Geoffrey Cook 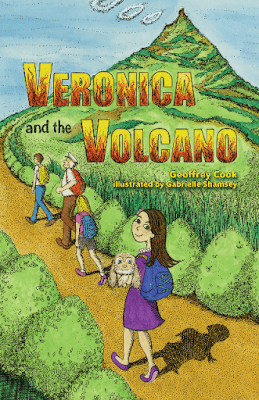 How can we inspire young women to be curious, courageous, and determined? How can we spark a passion for science and problem-solving in our youngest daughters? Author, serial entrepreneur, and father of two young girls, Geoffrey Cook, believes the answer lies in our stories.
Enter Veronica, the take-charge heroine and star of Cook’s debut children’s book, Veronica and the Volcano. Ten-year-old Veronica lives in a high-tech, gadget-filled house on the slope of an active volcano. When she leaves on a quest to find rare white volcano pearls on the far side of the biggest volcano of all, Mount Mystery, she leads her father, her best friend Maddy, and her friend's dad, the blustering Captain John, into a series of incredible adventures. But when the colossal volcano erupts, fears wins an election, and Veronica must square off against a fear-mongering villain: the Man-in-White.
“Veronica and the Volcano started off as a bedtime story I would tell my daughter Madeline about a young girl who lived on a volcano. Maddy couldn’t get enough. She would ask for a new story every morning on the twenty-five-minute drive to school. That’s when Veronica’s volcanic world began to emerge, and I started to write. Three years later I had over 300 pages.”
Cook’s story blends science with science fiction, straddling the world of the believable and fantastical and combining the latest earth science with incredible action. While writing, Cook extensively researched volcanoes, even visiting one. The most important volcanoes in the book are all based on real-world volcanoes like Krakatoa, Crater Lake, Mt. Pelee, and Tambora. In Veronica and the Volcano kids will root for Veronica every step of the way, and while they are cheering her on, they'll learn as well. Complementing STEM (science, technology, engineering, math) curriculum, the book is filled with educational elements about volcanoes, geysers, caves, and the wonders of physics. A glossary in the back provides an at-a-glance list of the facts in the book. Artist Gabrielle Shamsey lavishly illustrated the work with nearly 100 wonder-filled images of volcanic action.
“I believe that nature is as fantastical as any imagination. Raising daughters who embrace science and nature is one of the great challenges of our time. I hope Veronica can inspire young girls with an appreciation for the mystery of nature and a curiosity for science.”
Veronica and the Volcano is available now in paperback, color hardcover, and audiobook on Amazon and at selected independent bookstores.

ABOUT THE AUTHOR: CEO by Day / Children’s Book Author by Night

Geoffrey Cook is a serial entrepreneur and public company CEO. He is the CEO and co-founder of The Meet Group (NASDAQ: MEET) and previously founded EssayEdge and ResumeEdge from a Harvard dorm. He runs 5 mobile apps with 10 million monthly users, so he is always thinking of new ways to use technology to engage a global audience.

Geoffrey started telling Veronica and the Volcano stories to pass the time with his daughter Madeline on the twenty-five-minute drive to school every morning. She enjoyed his stories, and so he wrote them down.

Veronica and the Volcano is available on Amazon. Find out more at www.geoffreycook.com and connect with the author on: Facebook, Twitter, Goodreads and LinkedIn

The first 15 people to enter will receive the book for free!
Enter here to get your copy!
at November 07, 2017
Email ThisBlogThis!Share to TwitterShare to FacebookShare to Pinterest
Newer Post Older Post Home