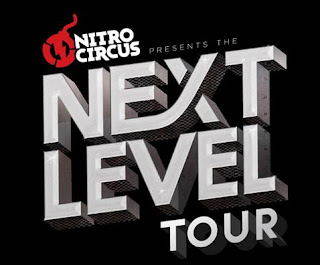 With the all-new Next Level Tour, Nitro Circus promised an epic event filled with game-changing feats and unbelievable stunts, and its world-debut Saturday at Canberra, Australia’s GIO Stadium more than delivered the goods. Thanks to a massive production, featuring the biggest ramps ever to hit the road, this cast of all-star action sports athletes and thrill-seeking daredevils blew away the crowd with new tricks, new vehicles and more in an electrifying show that is simply too big to fit indoors.

Nitro Circus’ moto athletes proved they are all in by sending huge, gravity-defying tricks that definitely took the sport to new heights. USA’s Gregg Duffy, the first person ever to land a double front flip on a motorbike, stomped two incredible front flip variations for the GIO Stadium fans. The Canberra crowd also went wild for hometown favorite Harry Bink after he landed an FMX double backflip. For this very dangerous trick, one attempted by only a handful of riders, Bink shot more than 60-feet into the air to get the clearance needed to complete the two full rotations around before touching down on the lander. For video and photo highlights of all the action go here.

All of these aerial exploits were possible due to the Next Level Tour’s innovative ramp setup. The FMX takeoff ramp alone towers 15-feet above the show floor (five feet taller than anything toured before) while the lander also looms large, standing 23-feet high. First dreamed up at Travis’ “Pastranaland” compound then perfected at Nitro World Games, these ramps were never supposed to tour, as they were considered far too large and complex to be set up more than once. But Nitro Circus’ production team was determined to showcase them, and the future of action sports, to its diehard fans around the world.

“Getting the chance to debut this show in my hometown was so awesome. For my family and friends to see what the boys can do on this sick setup made it even more special,” Harry Bink said after Next Level’s high-octane kickoff. “Video clips or pictures can’t prepare you for just how big these ramps are.” 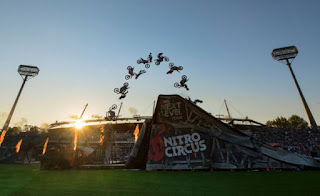 After travelling across Australia through April, Nitro Circus presents: the Next Level Tour will arrive in North America in May. American and Canadian fans alike should not miss this all-moto adrenaline-rush and their chance to see action sports history: tickets are available now at nitrocircus.live.

Fans can also get up close and personal with Nitro Circus and the Next Level team thanks to the all-new Nitro VIP Club package. In addition to premiere seats, VIP Club pass holders will have the chance to take a behind the scenes look at the show with an exclusive pre-show track walk. VIP Club pass holders also have the opportunity to meet some of the riders during an autograph signing session, receive a souvenir poster and get a chance to win cool Nitro Circus swag. 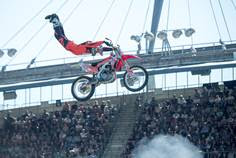 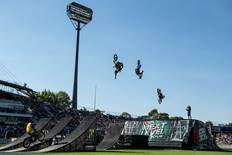 live events and unbelievable original content that at once exhilarates, captivates and inspires thrill-seeking fans worldwide.  Co-founded by global superstar Travis Pastrana in 2003, Nitro Circus has since grown into a multiplatform phenomenon producing hit television shows, critically acclaimed documentaries and innovative digital offerings. That success gave rise to the Nitro Circus Live tour. Created in 2010, Nitro Circus Live has travelled the globe, playing to sold-out stadiums on five continents. The company introduced an innovative breakthrough in 2016 with the debut of Nitro World Games, completely rebooting action sports competition in the process. With over three million tickets sold to date, television programming that has aired in over 60 countries, more than 20 million engaged fans across its social media platforms and a burgeoning consumer products business, Nitro Circus is at the forefront of action sports and entertainment. For more information visit www.nitrocircus.com

Now who wants to win a family 4 pack of tickets to see the show in Kelowna? Enter below and be sure to enter everyday and by sharing on Facebook as well to earn more chances. The draw will take place on May 5!