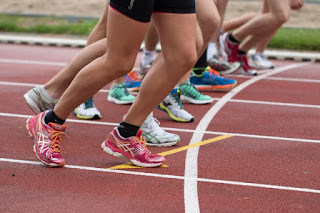 Bringing up a strong and healthy child is one of the most important goals for every parent. We are not going to speculate on the best way for you to raise a kid. Instead, we are offering scientific evidence that there is an activity to help them grow mentally strong and healthy.

Running has a long list of benefits. It will not only foster a love for sports and prevent obesity but also trigger endurance and take care of your kid’s mental state in 6 different ways.

Running balances out effects of a sedentary lifestyle

Modern-day children spend half of their time in a digital world. With their eyes glued to the screen, they can keep still for hours. Now, with the other half of their day spent in school sitting at the desk, your child’s lifestyle becomes far from active. A sedentary lifestyle leads not only to weight gain but can also cause depression and anxiety, as this study shows.

Moreover, a research done by Flinders Medical Centre reveals that 24% of teenagers will suffer the symptoms of major depressive disorders starting from age 15. Enough evidence to become concerned about it, right? To overcome this health hazard, consider introducing your child to recreative running.

A 15 min jog will not just negate hours of sitting behind the desk, but it is an effective countermeasure for depression and anxiety. Physicians often recommend running as a general aerobic exercise to fight these disorders because of its antidepressant effect. A short jog will increase oxygen uptake and stimulate the body to produce more β-endorphins, also known as hormones of happiness. In other words, a short run will cause a general improvement of mood and make your child healthier.

Running is a good way to socialize through competitions

There is no denying that human is a social creature. Staying in contact with other people is a vital component of personal development. Being in a company of peers who share your child's interests also determines their well-being. By communicating with other kids, they start developing the sense of self and learn to adjust to the expectations of others. Social skills and habits, formed at the stage of pre-teen and teenage development, will stay with your kid for life.

A child interacts with a group of his schoolmates daily, but it is the extracurricular activities that will introduce them to a broader variety of social situations. This way your child can develop a more versatile personality. It becomes even more important when a child doesn’t have many friends at school as they get the opportunity to socialize while practicing sports. As a matter of fact, socializing plays an important part in supporting mental health. That is where running as an accessible activity reveals it’s social component. There are many competitions that your child can take part in and meet youth of the same age with shared interests:

Any of these activities will be useful for your kid to find a circle of like-minded people. Along with forging friendships during competitions, your child will take up a healthy lifestyle.

Most children experience troubled sleep growing up. Some of us can still remember long negotiations with our parents and a strong desire to stay up late. Now, when you are a parent yourself, you are playing on the opposite team. You would want your child to go to bed on schedule so that they get a decent amount of sleep. And rightly so, science says.

It goes beyond wanting your kid to have enough energy to stay productive and active during the day. As a study from Norwegian University of Science and Technology, sleep disorders in young age can cause mental health issues in the future. Several other researchers confirmed that sleep problems have a direct connection to mood swings, breathe disturbance and other central nervous system disorders in teenagers. Running leads to hormone release that will suppress daily stress and relieve the tension of a tired body and mind.

Additionally, the intensive kinetic exercise of running will help your kid spend the excess amount of energy, fall asleep faster, and have a better quality of sleep. Some studies also confirm the positive effect of aerobic exercises on people who suffer from insomnia.

Unfortunately, modern children appear to have an increasing number of phobias. Accidents can cause some fears to fix, like an animal phobia or a fear of natural surroundings. Other fears build up because of low self-esteem, anxieties being one such instance. There are various ways to deal with the issue, and self-help was proven to be one of the effective ways to treat phobias. Introducing aerobic exercises will help to boost self-esteem and fight certain phobias.

The key is in goal setting and making sure that your kid achieves what they planned. When they set a goal of running a 5K in 15 minutes and move forward to get to the set result, they will develop discipline and a sense of achievement. Your child will most likely finish the track with a broad smile of satisfaction, and this is a good sign of the self-confidence boost.

Running can help your kid stay sharp during the day. Aerobic exercises, such as running, increase the production of the neurotransmitters dopamine and norepinephrine. These hormones tell us to stay focused and support the attention span. Also, a regular running schedule improves the tonus of locus coeruleus. In this case, your kid will be more alert and will react faster to an unfamiliar situation.

Some researchers also made claims that running can be an effective treatment for ADHD. This study reveals that aerobic exercises equate to the medical treatments of the disease. The experiment involved observing two groups of children with ADHD. The first bunch took methylphenidate as a medicine and the second group did aerobic exercises. After some time, the observers measured the progress of the treatment, and it revealed that both groups experienced an equal level of improvement.

Studying is based on cognition - a process of understanding the way the world works. Long story short, cognition is regulated by a complex of mental abilities that define human interaction in everyday life. Major cognitive skills responsible for learning are as follows:

Recently, Brain Injury Research Center and the University of Illinois released a study describing a relation between active exercises and enhancement of cognitive abilities. Running can influence cognition on the molecular level. It affects the management of energy metabolism and synaptic plasticity. To put it simply, running makes our brain form neural connections faster. The study also confirmed that adding a healthy diet yields an even better result. Thus, your child can start performing at school better and will be less overwhelmed by new information during the day.

These are a few benefits of running, alongside with its main perk - accessibility. Running is an easy-to-learn aerobic activity that does not require special sports inventory or going to a special facility. A jogging session is also easy to schedule and the expenses stop at a proper pair of sneakers and comfy clothes. One more thing to add: children follow good examples. Run alongside your child, and it will be their best motivation for developing strong mental health.
at July 02, 2018
Email ThisBlogThis!Share to TwitterShare to FacebookShare to Pinterest
Newer Post Older Post Home