Water saving plumbing fixtures to update your bathroom with 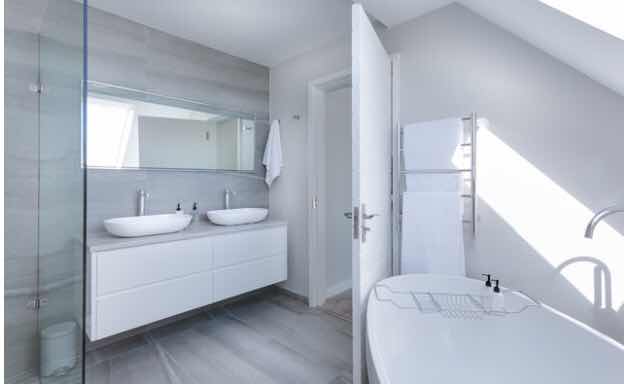 Low-flow fixtures are mandated by certain government entities for a reason: these allow a homeowner to save water, thus resulting in significant monetary savings each month, not to mention contribute to saving the environment. There are many models of low-flow versions of toilets, taps, and shower heads, as well as aerators for taps. These models vary on the type of technology used in their creation. However, they provide just the same benefits.

More details on low-flow bathroom fixtures are highlighted below.

The following are the two basic kinds of low flow shower heads:

- Aerating: This particular low flow shower head type mixes water and air together so that a misty kind of air spray is formed. It creates a significant amount of both moisture and steam, and thus isn’t advised in places known for humid climates.

A low-flow shower head is the perfect replacement for an older shower head that has been designed to have a 5.5 GPM flow rate.

This type of toilet, as well as the newer ultra low-flow toilet, is a type of toilet designed to utilise half the water that the traditional toilet consumes. While the traditional toilet consumes 3.5 gallons each flush, the low flow type consumes an average of just 1.6 gallons each flush. This design has led to the belief that there are low-flow toilet models that can’t flush efficiently.

Fortunately, the coming of newer technologies served as remedies to these supposed problems. But that’s not all: majority now have half-flush options, suitable for the removal of liquid wastes, together with the full-flush option that’s suitable for the disposal of solid wastes.

- Gravity-Fed Low-Flow Toilets: The said type of low-flow toilet makes use of the weight of the water to push it down. These options are cheaper and not that noisy compared to the pressure-assisted type of low flow toilet.

- Pressure-Assisted Low-Flow Toilets: The said kind of toilet usually is noisier. But on the upside, it is able to lessen water consumption by almost half unlike the above type of low-flow toilet. This particular system makes use of air pressure that’s built up in the tank to push water down.

Old sink taps waste lots of water, which leads to money getting tossed down the drain. As such, they need to be replaced as soon as they are found. Old taps use 2.5GPM and beyond, and that’s a lot.

As for replacement options, you have two ideas you can go with. A new tap, particularly one that uses 1.5GPM water or less, can replace the old tap. Another option, one that does not involve the complete replacement of the old tap, is the installation of an aerator. Also called a flow restrictor, an aerator may be set up on almost all taps, allowing for cheap and easy modification. Setting one up also helps you save money over the years.

As mentioned above, low-flow fixtures help in saving money since they prevent the overuse of water, especially if connected to a water tank with back-flow prevention device at home. But these fixtures cost more compared to the traditional fixtures, hence making them an investment. The thing is, because numerous building codes in different places demand that you incorporate low-flow fixtures to your home, you really will need to spend on them. Fortunately, the returns—the savings—can be quickly acquired, therefore making these fixtures a worthwhile investment.