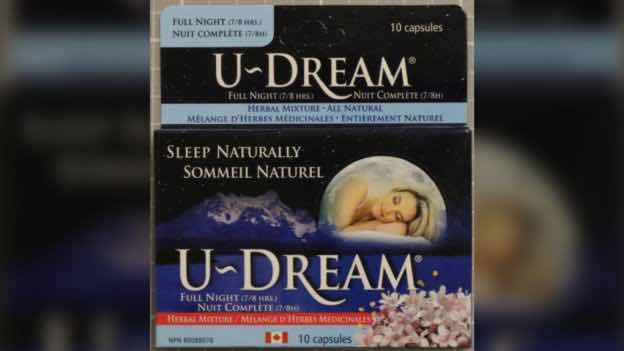 Vancouver-based sleep aid U-Dream was found to contain a compound that’s structurally similar to the pharmaceutical sedative zopiclone by the U.S. Food and Drug Administration (FDA) and Health Canada. The product was being marketed as an all-natural herbal mixture that helps induce sleep.

Zopiclone use can cause dependence or abuse, and stopping the drug cold-turkey could cause withdrawal symptoms, including convulsions, shaking, muscle cramps, nausea, sweating, hallucinations, and insomnia. Zopiclone should not be used by pregnant or nursing women, children, or patients with breathing difficulties.

Dr. Niket Sonpal, an internist and gastroenterologist at Touro College of Osteopathic Medicine, in New York warns the public that while the recall is in effect in Canada, “the drug can be found online. In the U.S. The FDA has only issued a public notice advising consumers not to purchase. If someone is the U.S has not heard of the recall in Canada, or the public notice by the FDA, they might be taking a possibly addictive drug under the notion that it is an herbal aid. That can be dangerous.”  Since its introduction two years ago, the product has been flying off the shelves and has been widely popular online, including Amazon where it is no longer sold.

After 10 straight days of taking U-Dream, A Candian man suffered a cardiac arrest and died in his bed, only to be revived by the couple’s older son.

Now that she’s heard the news about the discovery of the pharmaceutical compound, his wife is convinced U-Dream caused her husband’s heart attack.

“He did not have any previous heart issues, he would go for routine medical check-ups. There’s nothing in his past with heart issues,” she said.

Belinda and Jim said they heard from medical officials at the hospital that U-Dream had already been flagged after someone else suffered a similar cardiac event.

The best thing you can do is stick with all natural melatonin!