3 Healthy Meals For Moms On A Budget 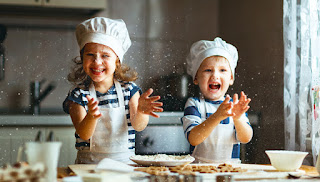 Many things have changed over the past few decades in the United States, especially for moms. As moms have gone to work and become busier and busier, we've had to change the way that we approach raising our kids -- but no mom wants those changes to hurt our children or lessen the quality of their lives. With that being said, perhaps one of the most dramatic changes has come in how we feed our kids. It isn't your intention to feed your kids low-quality food, of course, but the fact is that lots of kids don't exactly have the best taste, and those picky eaters can be hard to satisfy! Furthermore, the busier you get as a mom, the less time you'll have to prepare meals -- and it shouldn't be solely on you to handle meal prep, anyway.
These reasons, among many others, are why there has been an increasing reliance on fast food when we feed our kids. Kids love fast food -- it's a quick way to sate their hunger. For that matter, you probably love fast food as a parent too, at least every once and a while. It's so much easier to pick up a burger than to take the time to cook a big meal, and for that matter, it's usually pretty cheap, too. No wonder the typical American will find themselves eating burgers 4.3 times a month, which comes down to a little over one burger a week. However, our consumption of unhealthy fast food has consequences. Each year, more than 2 million Americans die; and the number one cause of death in the United States is heart disease. Much of this can be linked to our consumption of fast food. The younger you are when you begin eating fast food, the more of an effect will have on your overall health. This is why it's so important to feed your kids healthy food. However, this can be challenging when you don't have a lot of time, and don't want to spend too much money. That's why we're listing some of our favorite cheap, healthy foods meal ideas for moms on a budget!

All kids love chicken tenders, but the tenders that you can buy from fast food restaurants aren't such a good idea if you're concerned about your kids' health. Luckily, it's not difficult at all to make chicken tenders at home and to ensure that they have the same appeal for your kids, while at the same time being much healthier than their fast food alternatives. One of the ways you can add a creative twist to these chicken tenders -- that your kids will love -- is by adding coconut to the mix. This gives the tenders some sweetness, but not in a sense that your kids will be intimidated by. Otherwise, these tenders are fairly straightforward; you'll begin by cutting the raw chicken into strips, then dip those strips in egg before coating them in that flour, coconut, and spices mixture. The really healthy kick comes through baking the tenders -- usually for about 25 minutes, at 425 degrees Fahrenheit -- rather than frying them. This prevents them from becoming too heavy and greasy. The coconut flakes will ensure that the tenders maintain their crunchiness!

Kids love tacos, and the great thing about this meal is that it's really easy to make. It's made even healthier through the use of fish, a meat that is known for its lightness and beneficial vitamins. Furthermore, you can make this a regular routine through the ever-popular Taco Tuesdays, taking a lot of the guesswork out of your menu planning. Now, fish might sound like an expensive ingredient, but you can go with cheaper alternatives like tilapia that are easy to cook and just as tasty as more expensive types of fish! You can either bake your fish with spices or bread and bake it as well, which will at a bit of a crispiness your kids will love. Toss it into the taco with lettuce and veggies -- and if you want, even some fish taco sauce! A healthier alternative to the typical restaurant fish taco white sauce is 75% yogurt and 25% mayo, giving a similar flavor with much less fat.

What's easier than a meal that involves mixing up all your ingredients and pouring it into a pan? A frittata is extremely simple, but will taste as if you put a ton of hard work into it! Furthermore, its egg base is something that your kids will embrace without protest. You could even sell it to your kids as breakfast for dinner, adding a bit of specialness to the meal -- which is half the battle of convincing your kids to eat something! A frittata essentially involves breaking a bunch of eggs -- depending on how many people you're feeding -- into a bowl, tossing in some veggies and cheese, and either cooking your mixture in a large skillet or even baking it. The result is similar to an omelette, and full of flavor, but you barely had to put any effort into it! What more could a mom ask for?
It's undeniable that there is ultimately more effort put into making meals for your kids than simply buying them from a fast food restaurant. But the results are undeniable. Not only are you feeding your children healthier food; you're also saving money. While fast food might seem cheap at first, if you're overly reliant on it, the bills add up. Therefore, it won't be long before you see results when you transition from fast food to healthy, home-cooked meals.