Important things to know before hiring a mobile mechanic!

January 03, 2014
6 months ago I had a very nice car, it was an Eagle Vision. It was all leather interior, sunroof, power everything, just beautiful.

One day our car began making this horrible loud clunking noise and we were afraid to drive it to a mechanics because if it broke down along the way we need to pay for a tow truck on top of the repairs the car needed. So I searched online to find a mobile mechanic and seen one with a BBB rating at an A and the BBB is like a report card for businesses so this seemed good to me. 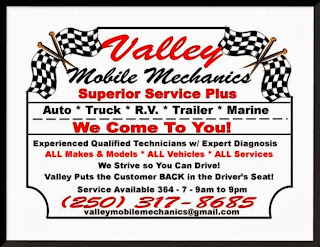 So I called the guy named Peter and he gave me a big speech about having 25+ years experience and the best prices in town, yada yada yada. So he came to my house and checked out my car. After the inspection he had decided the diagnosis was a problem with the head of the engine. He would need to tow it to his shop to fix it. Here is where you need to pay attention.
He said we needed to pay 600 upfront and the other 600 when we picked up the car. He wrote out a very shady receipt that simply said 600 parts and labour. He said he would phone in a day once he had figured out how long everything was going to take. We didn't hear from him, I had to call and ask what the deal was. One day it was he needed this part, another day it was I had to work elsewhere, and the excuses kept coming. So after about the 10th phone conversation he said to me that the price had gone up because the work he did was fine but something else in the engine had gone wrong and we needed to pay him 2000 instead of the 1200 we had agreed on. We decided enough was enough we would just take our car and sell it or figure out a different plan. He said ok well why don't I buy it off you, I agreed to meet him. He never showed up. So I got home and called him and there was no answer. I called for days, I even had other people try contacting him and he never answered, we all left messages and he never replied. So I have taken my case to the police and they said they will do what they can but it is a civil matter so they can't do much, this is where paperwork comes in handy, I still have my registration and insurance info so he stole my car and that is proof. So here are some things you need to know before hiring a mobile mechanic:

So I was left with no car, 600 dollars down the pipes and this guy had seen I had 3 kids and was clearly not rich. Be careful who you do business with, I have been trying to catch up on things ever since then and it has not been easy! Everyone from the Okanagan Valley beware of Valley Mobile Mechanics! Their BBB rating is now an F and you can see it HERE!