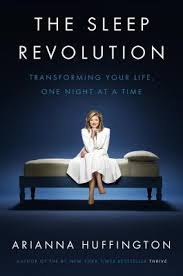 “Arianna Huffington is one of our leading authorities on the life well-lived. In this passionate, deeply researched book, she reveals everything you need to know about the magic elixir of sleep: from how to get some, to how to get enough. I dare you to read this book and carry on depriving your body (and soul) of the nightly nourishment it so desperately needs.” —Susan Cain, co-founder of Quiet Revolution and author of Quiet
“Arianna shows that sleep is not just vital for our health, but also critical to helping us achieve our goals. Sometimes we need to sleep in to lean in!” —Sheryl Sandberg, Facebook COO and author ofLean In
“Count on Arianna Huffington to write a book on sleep that kept me up at night. The Sleep Revolution is invaluable, interesting, and ultimately necessary for us all. It explains why we are so tired and how that has to change. Here is the science, history, and culture of the role that sleep plays in our lives —and the role that it should really play.”
—Atul Gawande, MD, MPH, surgeon, researcher, and author of Being Mortal
In her #1 New York Timesbestseller Thrive, Huffington Post cofounder and editor in chiefArianna Huffington told the story of the day she collapsed from exhaustion, and how that became her wake-up call. She realized that, contrary to our collective delusion, burnout is not the necessary price we have to pay for success. Thrivekicked off a global dialogue about redefining success through well-being, wisdom, wonder and giving, and as Arianna toured the world to talk about the book, she noted one topic kept coming up again and again: sleep. The importance of sleep as a gateway to a more fulfilling way of living struck such a powerful chord that she realized it needed a much fuller exploration.

In her new book, THE SLEEP REVOLUTION: Transforming Your Life, One Night at a Time(Harmony Books; Hardcover; $26.00; On Sale April 5, 2016), Arianna illustrates how the combination of the myth that burning out is the necessary price for accomplishment and success, along with the distractions of a 24/7 wired world, has imperiled our sleep as never before, resulting in a global sleep deprivation crisis. She goes on to show the crucial role that sleep plays in our every waking moment—and how we can harness its power to improve every aspect of our lives. THE SLEEP REVOLUTION is a sweeping, scientifically rigorous, and deeply personal look at sleep, from its history through the centuries to the mystery and meaning of dreams to today’s emerging golden age of sleep science. Every week, new research reveals how vital sleep is to our health, happiness, job performance, and relationships.
If you type the words “Why am I” into Google, the first suggestion, based on popular searches, is “Why am I so tired?” These five words sum up what Arianna calls “the existential cry of the modern age.” Even though we know more about sleep than at any other time in history, and how important it is to our physical, mental, emotional, and spiritual well-being, actually getting enough sleep is harder than ever. According to a recent Gallup poll, 40 percent of all American adults are perpetually sleep-deprived, clocking in less than the recommended seven hours. In THE SLEEP REVOLUTION, Arianna examines the mystery of sleep, and how we can tap into it to regain control of our out-of-kilter lives, recharge our bodies and minds, and reconnect with ourselves.
She shows how our cultural dismissal of sleep as time wasted undermines our health and decision making and can sabotage our relationships, careers, and even our sex lives. She approaches sleep from every angle, including its critical role in sports, and its often overlooked role in productivity and creativity. She takes on the manipulative and dangerous sleeping pill industry, and talks about the ways in which our addiction to our devices disrupts our sleep. She also presents scientific recommendations and expert tips on how we can all achieve better, more restorative sleep. By highlighting the many areas where the benefits of sleep are being rediscovered—from professional sports and college campuses to the hotel industry and workplaces around the world—Arianna points the way forward to the amazing innovations, reforms, and even new technologies that are ushering in The Sleep Revolution.
The Huffington Post is also launching the #SleepRevolution College Tour at 50 campuses, including Stanford, Georgetown, UCLA, Ohio State, and the University of Georgia. The goal is to spark a national conversation, based on the latest science, about the importance of sleep and the dangers of sleep deprivation, which is at the heart of so many stress-related mental health issues in college. To help students embrace sleep as a performance enhancer rather than something to be avoided, HuffPost has partnered with major brands, including Sleep Number, Jawbone, JetBlue, Marriott, Spotify, Lands’ End, Sleep Shepherd and Headspace, to host “sleep fairs” to give students tangible tools and products to make changes in their lives and to learn better sleep habits. Arianna and leading sleep experts will be speaking at campuses around the country, and there will be major social media campaigns, as well as sleep-themed blog posts and videos on The Huffington Post from students and professors.
In addition, The Huffington Post, in partnership with Uber, is spearheading a campaign to generate awareness around the dangers of drowsy driving. Lack of sleep can lead to cognitive impairment that’s as dangerous as driving drunk. Drowsy drivers are involved in 328,000 accidents each year, 6,400 of which result in deaths. Through collaboration with road safety advocates, this movement aims to get drowsy people out of the driver’s seat. In addition to activating policymakers and government officials, the campaign includes a dedicated PSA, sleep kit giveaways, and partnerships with companies committed to providing Uber rides for employees who work before or after a certain hour.
###
ABOUT THE AUTHOR

Arianna Huffington is the cofounder, president, and editor in chief of the Huffington Post Media Group, and the author of fifteen books. In May 2005, she launched The Huffington Post, a news and blog site that quickly became one of the most widely-read, linked to, and frequently- cited media brands on the Internet. In 2012, the site won a Pulitzer Prize for national reporting. She has been named to Timemagazine’s list of the world’s 100 most influential people and theForbes Most Powerful Women list. Originally from Greece, she moved to England when she was 16 and graduated from Cambridge University with an M.A. in economics. At 21, she became president of the famed debating society, the Cambridge Union. She serves on numerous boards, including The Center for Public Integrity and The Committee to Protect Journalists. Her book,Thrive: The Third Metric to Redefining Success and Creating a Life of Well-Being, Wisdom, and Wonder, debuted at #1 on the New York Times bestseller list.

ABOUT THE BOOK
THE SLEEP REVOLUTION Transforming Your Life, One Night at a Time By Arianna Huffington Harmony Books • On Sale April 5, 2016 Hardcover • $26.00 • 978-1-101-90400-8
For more information, including Arianna’s book tour schedule, please visit:
www.ariannahuffington.com