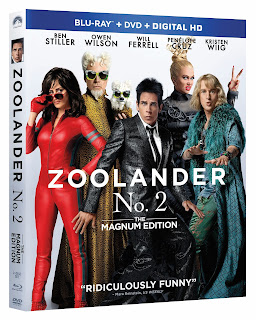 Prepare for the Dangerously Sexy Adventure on Digital HD May 3, 2016 and on Blu-ray™ Combo Pack May 24

HOLLYWOOD, Calif.  – Long time no Z. Ben Stiller, Owen Wilson and Will Ferrell reprise their iconic roles in the “ridiculously funny” (Mara Reinstein, Us Weekly)ZOOLANDER NO. 2: THE MAGNUM EDITION, which critics are calling “every bit as good as the original classic” (Gersh Kuntzman, New York Daily News).  The highly anticipated sequel hits the catwalk on Blu-ray Combo Pack, DVD and On Demand May 24, 2016 from Paramount Home Media Distribution.  The film arrives fashionably early on Digital HD May 3.
Featuring Penélope Cruz, Kristen Wiig and a host of celebrity cameos including Justin Bieber and Billy Zane, the hilarious comedy tops the original with even more wild and outrageous situations. When a mystery assassin starts killing off the world’s most beautiful people, haute-shot Interpol agent Valentina Valencia (Cruz) learns the key to this deadly plot lies with Derek (Stiller) and Hansel (Wilson).  Recruited for a top secret mission, they must return to the world of high fashion, reclaim their fame, and save the day. The only things standing in their way: the criminal mastermind Mugatu (Ferrell) and his evil fashion protégé (Wiig).

ZOOLANDER NO. 2: THE MAGNUM EDITION looks really, really ridiculously good-looking on Blu-ray Combo Pack and includes a Digital HD version of the film and behind-the-scenes featurettes. Go on location to Rome with Ben Stiller and the all-star cast as they discuss the legacy of Zoolander and reveal the secrets behind the sequel. Plus, discover the origins of the iconic character Derek Zoolander, and laugh out loud as Kristen Wiig’s Alexanya Atoz introduces her revolutionary new beauty product “Youth Milk.” And for a limited time only, get a bonus digital copy of the originalZoolander with the Blu-ray Combo Pack.

The Blu-ray Combo Pack available for purchase includes a Digital HD version of the film that can be accessed through UltraViolet™, a way to collect, access and enjoy movies.  With UltraViolet, consumers can add movies to their digital collection in the cloud, and then stream or download them—reliably and securely—to a variety of devices.