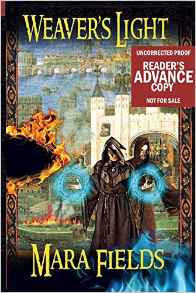 With nothing but his art to get him up every morning, master weaver Callan Vellus mourns the loss of his wife and son at the bottom of a bottle each night. He hardly thinks beyond his next bottle of brandy--until a vision of falcon-faced sorcerers destroying a city with fistfuls of blue flame jolts him into action.
Suddenly compelled to leave his loom and travel to the ruined city, he arrives to discover that the locals believe the fires were caused by lightning from a freak storm. Still haunted by the vision, Callan reluctantly dismisses it as an alcohol-induced dream.

But there is someone else who shares Callan's knowledge of the falcon-faced mages. Pashi is a young orphan girl with a secret: her mother taught her magic in a land that hasn't seen sorcery for eight hundred years. And it is that talent which saved her when the mages invaded and burned down her city.

When Callan finds Pashi in a smoldering ruin, he realizes that the falconmages do exist--and they have much bigger plans than simply burning one city. Together, Callan and Pashi learn that the mages are hunting for the fabled jewels of the ancient Yvis sorcerers so they can take over the entire realm by harnessing their power.
Determined to stop the invasion, they set out on an impossible quest. Can Callan and Pashi protect the jewels, locate the imprisoned Yvis sorcerers, and persuade them to use their powers against the falconmages?